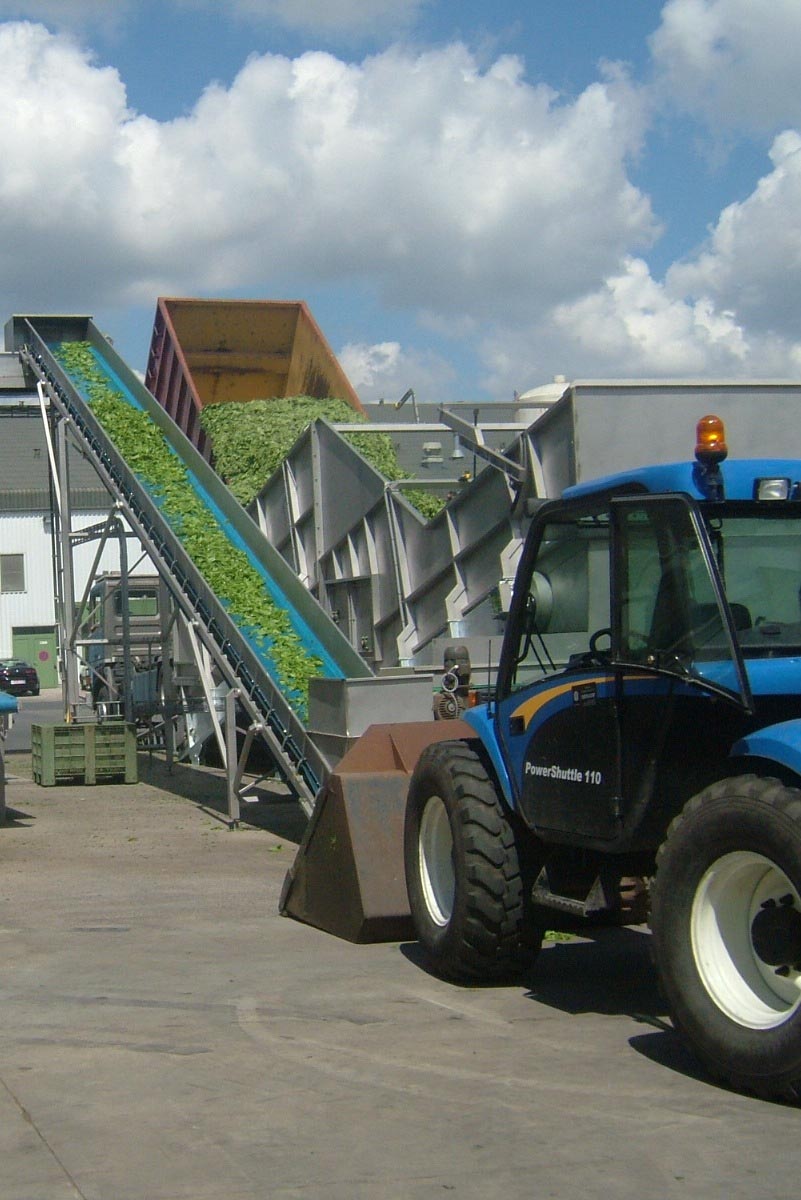 Pinguin, based in Flanders, is known throughout the world for the preparation of frozen vegetables.

Pinguin approached Munters, for their sites in Westrozebeke and Langemark for two important projects. In Langemark, the problem was the formation of condensation. Here, the fresh vegetables cross in bulk through a tunnel in which the temperature borders -30°C. At the exit of the tunnel, the temperature is +10°C. The difference in temperatures caused condensation on the ceiling, ground, products and packing, with the resulting risk of contamination. Another problem was condensation forming on vegetables – peas – froze again during storage in freezing rooms, which caused the peas to weld together in blocks.

Munters solved the problem by placing a desiccant dehumidifier at the exit of the tunnel. This dries the air in the room. Munters brought back the dry air to the coldest place of the room, just above the exit the freezing tunnel. The installation gives perfectly dry air, making it possible for Pinguin to store vegetables under ideal conditions – without condensation.

Munters installed a second dehumidifier above the door outside. When the door is opened, warm air penetrates in the cold space. Here, the Munters dehumidifier prevents the formation of condensation. Thanks to this Pinguin does not have any wet puddles on the ground, which is more hygienic. "The advantages of the installation are obvious", explains Koen Dejonghe, at Pinguin. "The ground is no longer slippery from condensation. We also increased the quality of the products. The vegetables no longer freeze together."

Another advantage of that the dry air prevents formation of frost on the refrigerating elements. The investment in the dehumidifiers made it possible to obtain a definitely higher and more constant output from the freezing tunnel. "Before, we had ordinary driers, but they did not have the same effect." At Westrozebeke, Pinguin called upon Munters to eliminate the formation of frost in the freezing rooms. In the workshop, the frozen vegetables were passed along a conveyor belt which carries them through various stages of packing. The conveyor belt passed through warm and cold areas of production, with formation of frost on the ceiling and ice on the cold store.

Constant control of moisture has many advantages for Pinguin. The absence of condensation ensures a dry environment and increases the quality of the products and safety in the factory. But the principal advantage is that Pinguin can maintain everywhere at a more constant temperature freezing. When there is formation of ice on the elements of freezing, its capacity decreases quickly. "We do not have only freezers to protect," continues Koen Dejonghe. "We have also much handling in our freezing rooms. Thanks to Munters, we do not have any frost on the machines, conveyors or any other material. That has a positive effect on the output. "Pinguin also decided to fight the formation of frost in its new automatic store by using Munters.